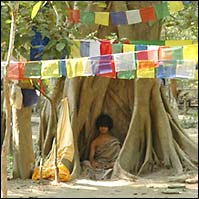 Devotees claim that Ram Bomjon, who is silently meditating beneath a tree, has not eaten or drunk anything since he sat down at his chosen spot six months ago.

Local doctors failed to reach a final conclusion, although they were allowed no closer than five yards from the boy mystic, declaring that they could confirm no more than that he was alive.

The popularity of the phenomenon is partly because it resembles an episode in the life of the historical Buddha, who was born 160 miles away around 543 BC. The Buddha achieved enlightenment when he meditated beneath a sacred pipal tree for 49 days.

Ram Bomjon is also sitting beneath a pipal tree, in the same posture as the Buddha is depicted, but his vigil has already taken longer.

Ram's mother, who is called Maya Devi, like the Buddha's mother, admits to anxiety, particularly at meal times. But she tells herself: "God took him to the forest and I have faith that God will feed him."

She said: "He's definitely got thinner. Early in the morning he looks sunken, like there's no blood in him, but as the sun rises he seems to get brighter and brighter."

The fervour increased last week when a snake is said to have bitten Ram, and a curtain was drawn around him.

After five days it was opened and he spoke. "Tell the people not to call me a Buddha. I don't have the Buddha's energy. I am at the level of rinpoche [lesser divinity].

"A snake bit me but I do not need treatment. I need six years of deep meditation."

Despite his protestations, "Buddha boy" is famous.
Back To Album
Copyright infringement? Contact the Webmaster and request removal of this file!
URL:

Thumbnail:
To embed this file into your forum/blog entry, highlight the URL, right-click and copy it, and then paste it into the body of your forum or your blog message, while in text mode (plain text editor).

If posting a message by using a HTML editor (FCK or MCE), you will have to use the appropriate buttons (Insert Image) from the editor toolbar. HTML editors have buttons for inserting hyperlinks, images and other HTML objects.