Hi! I'm glad more people are starting to notice the sick project that is 'chemtrails.'

Anonymous, you asked, "The [defense contractor] knows when it is going to rain and it spreads the stuff throughout the skies and fields and buildings?"

I'm afraid it is more sinister than that. What you have to understand is a group of very powerful people now control the world. In ancient times they were known as the 'nobility', and nowadays it's still the same except it's global. The people I'm talking about have TONS of money; they are literally the trillionaires of the world. Now these rich sons of bitches OWN all the huge corporations you see, and are often deeply involved in questionable industries such as weapons, genetics agribusiness, toxic chemicals, pharmaceuticals, drug running, human trafficking, wars, etc. Chemtrails is just a part of a vast criminal enterprise. The people who are doing this are SMART, obscenely RICH, and profoundly EVIL.

Let me paste part of something I wrote that might help clear things up on chemtrails specifically:


'CHEMTRAILS' are a component of an integrated atmospheric weapons system , which has multiple purposes, including weather modification, population control, advanced surveillance, biological warfare, and artificial intelligence. In North America and Europe, the program is run under the auspices of the Pentagon and NATO, obviously with help from the American and European defense contractors (Lockheed Martin, Northrop Grumman, Raytheon, Boeing, BAE, EADS, Honeywell, etc). Many others are obviously involved.

The scope and capabilities of this weapons systems are simply astounding, but should be no surprise considering the length of development (these projects have been running since Teller completed the H-bomb) and a budget somewhere between $500billion - $2trillion per year. The weapons system is currently deployed in our own skies, and has been since at least 1998 (the year nationwide spraying began). The systems' operation is responsible for the ugly persistent 'chemtrails', freak weather, and increasing respiratory disease reported throughout North America and much of Europe. Unfortunately, the true objectives and implications of this comprehensive military program are more sinister still. 'Chemtrails' visible on a satellite photograph

'Chemtrails' are complex particulates deliberately sprayed into the troposphere which superficially resemble jet exhaust. They have been found to contain high concentrations of aluminum and barium, which I have discovered are actually part of an advanced nanotechnology component. This will make more sense as I weave the pieces together of this vast tapestry. But first let me clear up the obvious first objection...

Some say chemtrails are the same as contrails. Not true! Contrails
are water vapor, and dissipate within a few seconds from leaving a
jet aircraft. Chemtrails have a duration of hours and spread out into
large fibrous clouds and thick haze. Put simply, these 'chemtrails'
are deliberately sprayed aerosols  complex nanoparticulates which
have been sprayed into the sky by military tanker aircraft. The
particulates include nanoporous anodic aluminum oxide (AAO) and
barium salts, which I have determined are involved in self-
assembling semiconductor nanotechnology. In other words, what the
military is spraying has swarm intelligence ('smart dust').


The reasons for this? Well, one should be obvious...
An air force insider added that other spray missions spread (barium) chemtrails to facilitate 3D radar mapping of the entire continental United States. He also said that the air force has been spraying storm fronts "for a long time". The military's main interest, he added, is experimentation aimed at gaining control of the weather for military use.

And yes, this weapons system has been responsible for a string of disasters including Hurricanes Ivan and Katrina, the Midwest flooding, the freak national tornadoes, and the persisting national drought. Now I realize someone who is reading this may be skeptical, as I
am claiming the military is using nanotech aerosols and directed
energy to control the weather, but I again assure you this is real.
Let me point you to a leaked 1996 Air Force paper entitled


Weather as a Force Multiplier: Owning the Weather in 2025.
A Research Paper
Presented To
Air Force 2025

...
Chapter 4: Artificial Weather
Nanotechnology also offers possibilities for creating simulated weather. A
cloud, or several clouds, of microscopic computer particles, all
communicating with each other and with a larger control system
could provide tremendous capability. Interconnected, atmospherically
buoyant, and having navigation capability in three dimensions, such clouds could
be designed to have a wide-range of properties. They might exclusively block
optical sensors or could adjust to become impermeable to other surveillance
methods. They could also provide an atmospheric electrical potential difference,
which otherwise might not exist, to achieve precisely aimed and timed lightning
strikes. Even if power levels achieved were insufficient to be an effective strike
weapon, the potential for psychological operations in many situations could be
fantastic.
11 December 1996

And we could go on and on from here.

These weapons are obviously in use against us.

Let's get back to the the weather modification aspect of this weapons system, as we see we have a steadily increasing string of disasters brought to us by the international banking cartel and their cronies in the American military-industrial establishment. Despite what the Air Force says to the contrary, the weather modification relates to HAARP (High Altitude Auroral Research Program), which beams energy into the ionosphere to generate lensing, allowing focused high-power ionic strikes to any location so-desired. The picture below is of the original HAARP facility in Alaska, now with multiple ground antenna locations and evolved into bigger and better weapons systems. 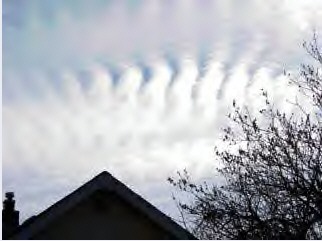 The picture below are examples of a HAARP-type ionic strikes accidentally captured by weather radar over the United States.

These images should make it clear that we have not had 'normal' weather over the United States for quite some time, certainly not since the year 2000. Furthermore, this has given the operators of these systems ample time to gather data for their computer models. At this point, the system is likely advanced enough that it can manage the details internally, requiring only the target scenario from the system operator. Furthermore, there is a strong case to be made that the chemtrails are now mostly sprayed from computer-activated drones (do not require pilots).

The leaked 1996 Air Force document confirms exactly what we have discovered in multiple samples from the chemtrails (aluminum oxide-based nanotechnology with apparent swarm intelligence). The nanofibers in chemtrails would implicitly have multiple functions in weather manipulation, including movement, internal sensing, water absorption, satellite position marking, ground control, thermal energy vectoring, and so on. But this is still scratching the surface of what's going on. There are key individuals within our government who have betrayed our country, and now are spraying our air with disease and modifying our weather without our knowledge or consent.

Furthermore, weather manipulation is only one function of chemtrails. Chemtrails contain genetically engineered pathogens as well, and my research indicates we have ALL been infected, and we all have chronic man-made disease from the weaponized pathogens sprayed in the chemtrails.

Background: Precipitates foreign nanotech fibers/ parasites through the gums in upwards of 99% of the human population. Most likely infective vector is chemtrails (sky aerosol spraying) due to high structural similarity between pathogens and the aerosol fibers.

1) Brush teeth very well.
2) Rinse mouth with water thoroughly.
3) Mix 2tsp (10mL) of Merlot Red Wine with 1tsp (5mL) Hydrogen Peroxide in a plastic cup.
4) Use the red wine / peroxide solution as a mouth rinse; Rinse mouth *vigorously* with the wine/peroxide solution for exactly five minutes. Make sure to swish it in your cheeks+gums, etc for the full 5 mins.
5) Now spit all the rinse into a bathroom cup.
6) Carefully examine the rinse for fibers. They are invariably present, and should look somewhat like wet chewing tobacco. Prepare to be shocked and upset. These are components of nanotech pathogens which we have all been infected with, most likely via chemtrails.

Optional
7) You can add 91% or higher IPA (Isopropyl Alcohol) to the precipitated fibers to remove the red pigment caused by the wine. The fibers generally float like a jellyfish on top of the IPA.

"pathogens and the general population":

Feel free to contact me if you need more information.